During the age of interplanetary travel, a need for the movement of packages containing supplies arose to the point that space travel itself came to a halt. One faction came to the rescue by modifying their spacecrafts to be used in such a way that supplies can be delivered to one side of the galaxy to the next within mere minutes – this faction was the M-Trons.

Their lead ship, titled Particle Ionizer, was robust enough to make it through the roughest asteroid fields and light enough to slip through enemy detection nets unstructions. Using its array of scanners, Particle Ionizer was able to pinpoint any unexpected hazards several parsecs away and thus, safely averting danger whenever possible.

The instructions come in the form of a small booklet that is about half the height of the larger booklets. The cover portraits the set with a backdrop of the normal M-Tron grid sky and a total of 16 pages with 19 steps, not including the sub-steps, are found on the following pages within.

Each step is easy to follow and clear on what pieces are to be used. The robot is brick built and is the ever so handy helper. As shown, the robot is able to fold up to fit into his compartment, which is later discussed in this review. A select few accessories are included with this set. Two that may need identification are the “flashlight” second to the right and “detector” middle.

A large selection of cones and antennas are bundled with this set. The windscreen is sleek and looks great. This piece in red is only found in this set and serves a vital role in the completion of the build.

A lot of goodies attached to this container. There’s the hammer, a flashlight, an antenna, and a tool that I am unsure of but it looks to be a handheld detector of some sort. The container holds a spare jet booster. Both sides are the same. A good view of the propeller system.

TLC took modern technology helicopter propeller system and infused it with a futuristic concept the spacecraft itself to create this delightful treat. The blades are connected to a five stud 1×1 brick and the brick sits on top of a spindle, allowing free-flow movement. The windscreen can open 90 degrees. Once shut, it is flush with the nose of the craft.

There is also a gun connected to a hinge on the front of the craft, whether it is for combat or research is unknown. Both sides are the same other than the fact that one side has a radio and the other side has a wrench.

Back without container and the wings pointing up. There are two black jet pieces on the lower bottom. As before but with the container loaded into the storage area and wings to the sides. The crane is quite impressive. It is able to hoist the supplied container in a large radius, as well as up in the air.

Four black round 2×2 plates provide extra support with joining pieces, a flat base, and an in-the-air look when the set is sitting stationary. There are two black propulsion systems connected towards the back of the bottom. The crane makes use of two hinge joints. The lower hinge connects to two red headlight pieces, which are connected to a 2×2 turntable.

Plenty of room for the minifig and his air tank. The cockpit has a printed control panel and a 1×1 clip plate that moves up and down. Here the robot is in storage. He does not attach to anything directly, but with the side panels closed, he won’t be going anywhere.

He does tend to slide around a small amount, though. Spacecrafts are always fun to swoosh around, too. Some nice pieces but they don’t fully make up for the low piece count. I always absolutely loved this set. While I don’t own it anymore, this great review is going to have me on Bricklink all day looking for a good deal.

Excellent set and an excellent review! I’m not much of a Classic Space fan, but this set looks very impressive. I love retro reviews. This is a good set, but honestly I was never a big M-Tron fan. I doubt I’d ever get this one, given the boring minifig and huge abundance of moving parts. Still a good set, and excellent review there. I’m going to review the Instructiojs Freeze Defender as soon as it comes in the mail. This is one of my favorite space sets lrgo any theme.

The concept of a space-themed helicopter is quite unique, and it looks sleek and is loaded with tools and equipment. I modified the cargo bay on mine slightly to make the robot fit in more snugly, without jiggling around.

Very good review too. I like the last few pictures. My set MISB copy off ebay actually came with a large MTron poster showing a cave scene from the catalogs, although I don’t know if they all included that. 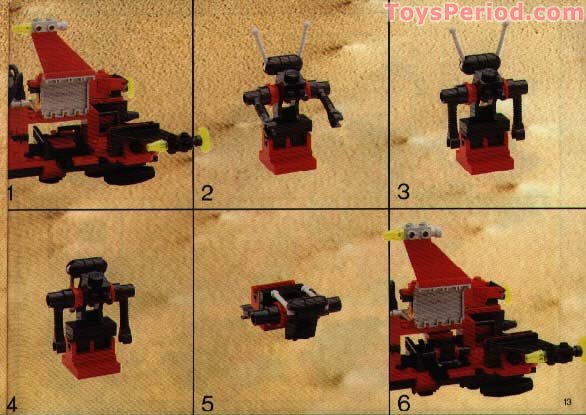 You need to be a member in order to leave a comment. Sign up for a new account in our community. Already have an account? How do you rate this set? Posted November 30, BricksetLugnetPeeronPhotobucket Album During the age of interplanetary travel, a need for the movement of packages containing supplies arose to the point that space travel itself came to a halt. One M-Tron minifig with no variation from the other M-Tron sets. A decent amount of printed M-Tron pieces. This set is not overly large but still has a formidable size for its piece count.